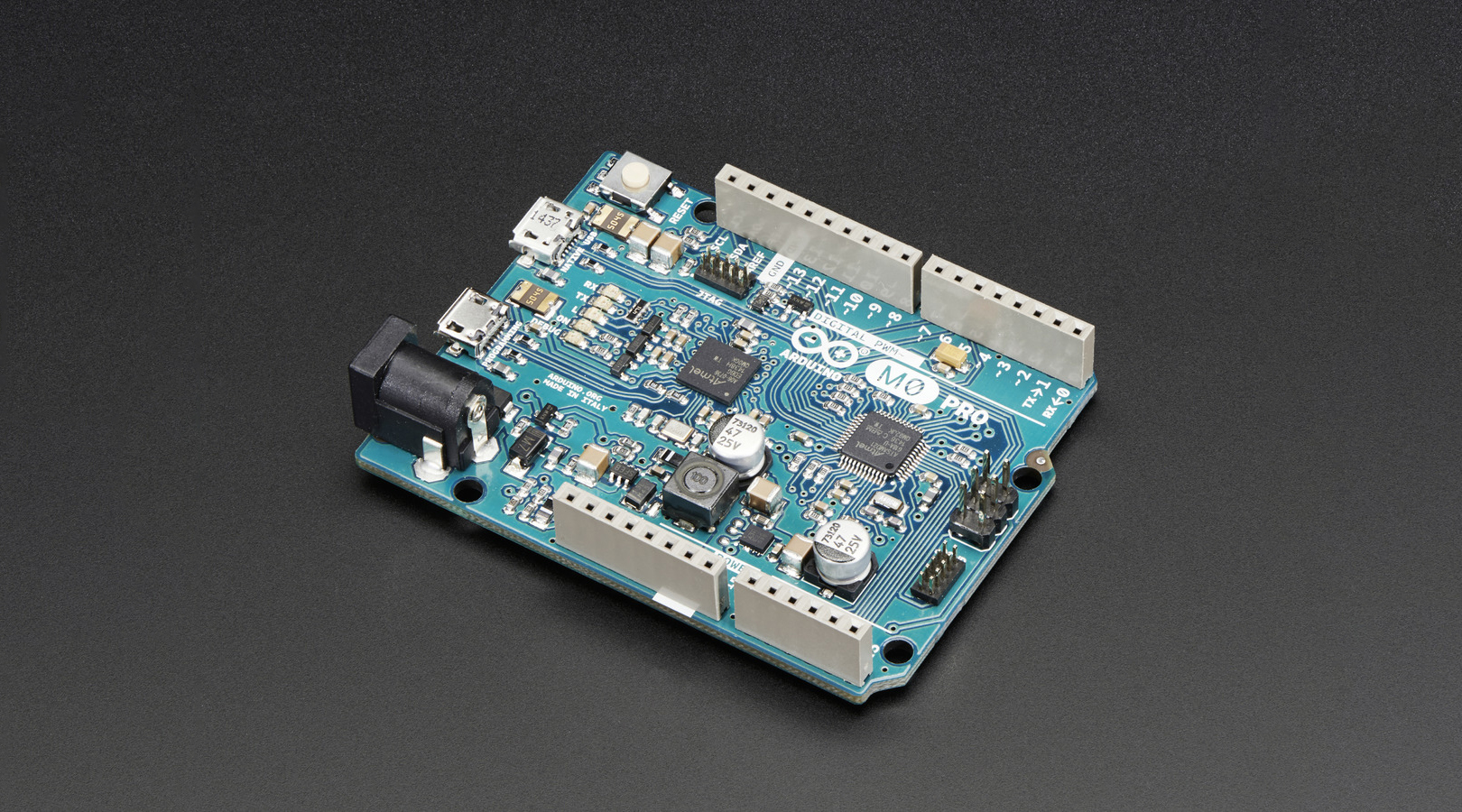 A famous aphorism by computer scientist David Wheeler goes: “All problems in computer science can be solved by another level of indirection” (this is sometimes quoted as the fundamental theorem of software engineering). This principle, or concept is ubiquitous in programming: functions abstract away the implementation and expose only the interface of a piece of code, classes defines abstract data types and let us care about what those types do and not how they do it; these abstraction mechanisms provide a level of indirection that allow us to produce code that is more efficient, more reusable and more maintainable. A software driver for an embedded platform is an abstraction that provides a way to abstract away the nitty gritty detail of the hardware and is just a thin software layer, made of definitions and access functions, between the hardware and the application code.

To help embedded developer write code for Cortex-M based MCUs (especially low-level code, such as peripheral drivers) and to enhance productivity and favor code maintenance and reusability and to ease integration with third party middleware (RTOS, communication stacks etc) ARM developed the CMSIS project: CMSIS stands for Cortex Microcontroller Software Interface Standard, a specification for an API interface that MCU vendors implements in their driver and that provides programmers with a standardized way to access the microcontroller hardware. CMSIS is a large project, involving low level drivers, real time operating systems and more. CMSIS – Core is that part of the specification that is currently implemented in all Cortex-M based MCU products. A CMSIS compliant driver is composed of several layers:

A CMSIS compliant driver and a hardware abstraction layer (both provided by the MCU vendor) are shown in figure 2. An application needs to include just <device>.h to use the CMSIS driver, or the HAL driver include file to use definitions and higher lever driver provided by the hardware abstraction layer, and the necessary files are automatically included (arrows in the diagram represent #include directives): 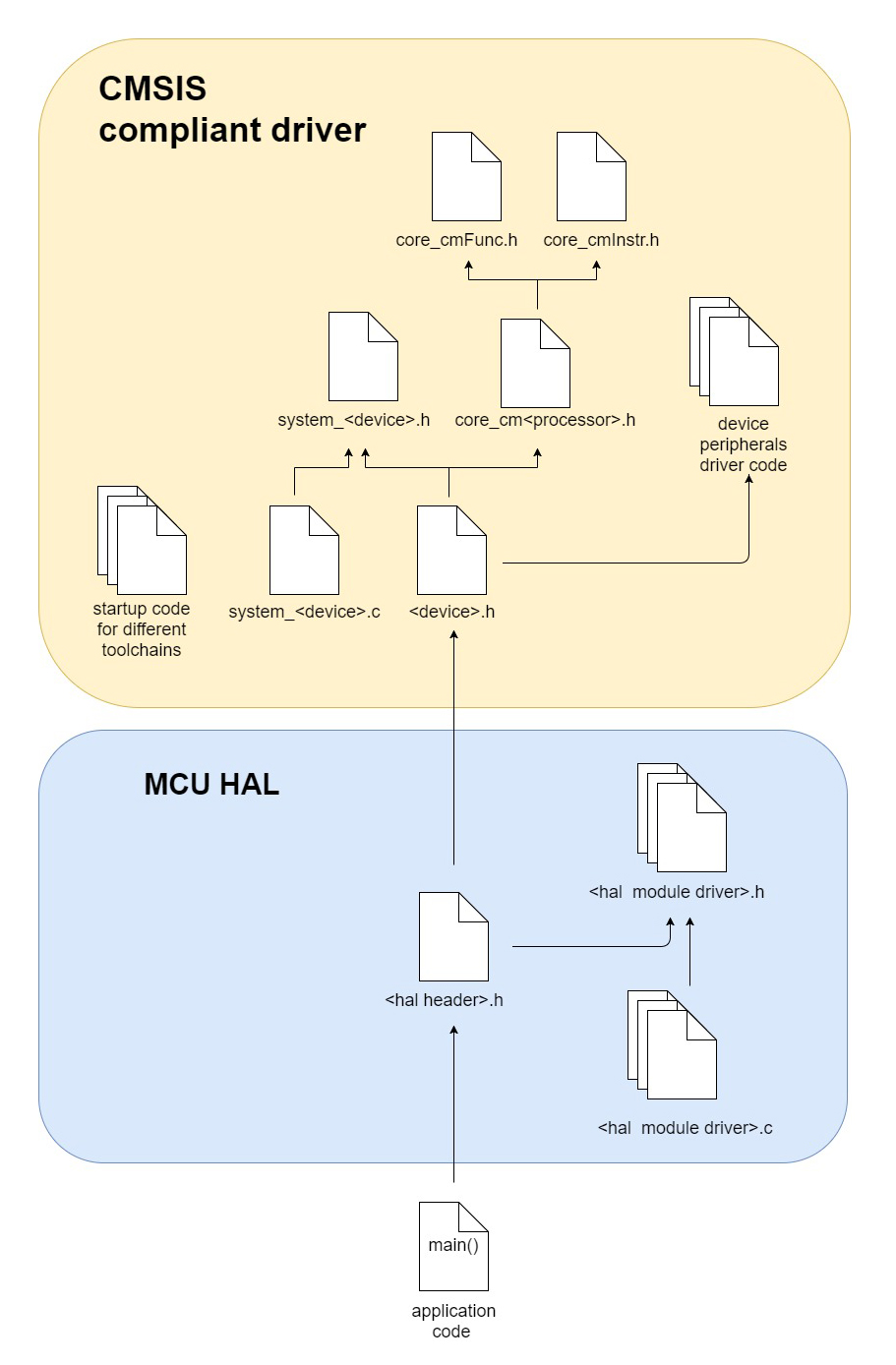 A CMSIS compliant driver also includes files system_<device>.h/.c  (where void systemInit(void), void SystemCoreClockUpdate(void)  and SystemCoreClock variable are declared/defined) and the startup code (toolchain specific, can be a C file or an assembly file), which contains the vector table and default handler functions for system exception and peripheral interrupts.

Programming the peripherals from C code 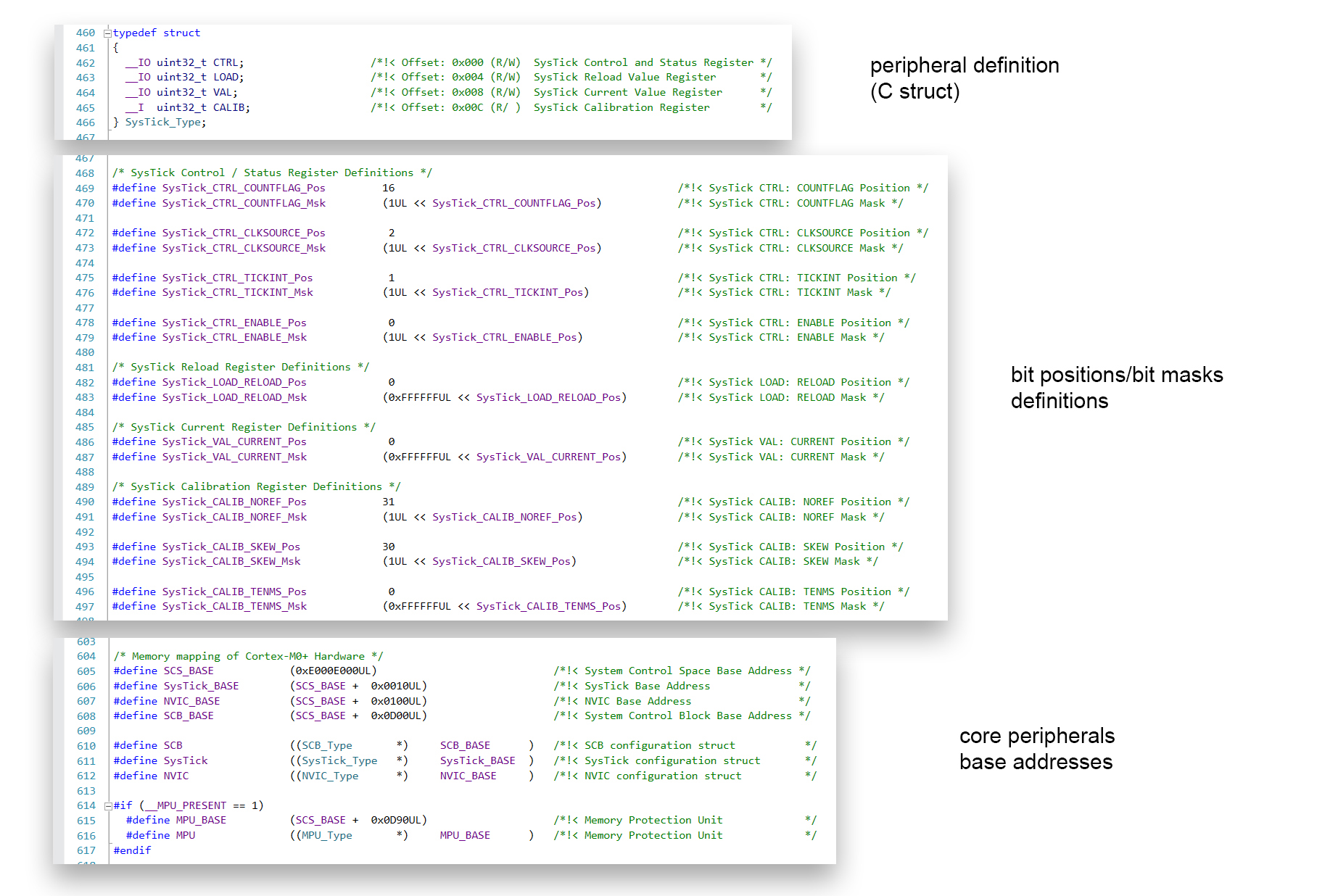 Core peripheral access layer is implemented in core_cm<processor>.h : it contains definitions of structures and addresses of all core peripherals common to all Cortex-M implementations, like NVIC and SysTick, and defines access functions fot those peripherals. Core peripherals are mapped int System Control Space (SCS), a bunch of memory addresses going from 0xE000E000 to 0xE000F000 (for a total 4 KiB). Device peripheral access layer is implemented in <device>.h and in other header files that it includes. Core peripheral layer is the same for all MCU products, while device peripheral layer is MCU specific and may differs slightly among implementations, but they mantain a similar look and feel among the various products. Mastering the device software drivers is necessary to create clear and efficient code, and in order to do so understanding the internal structure of the files is paramount. So let’s delve into the driver for the SAMD21G18A MCU, the controller onboard the Arduino M0 PRO.

The structure of a CMSIS compliant project for SAMD21 resembles closely the generic model shown in figure 2: <processor> is now cm0plus and the <device> is samd21g18a : 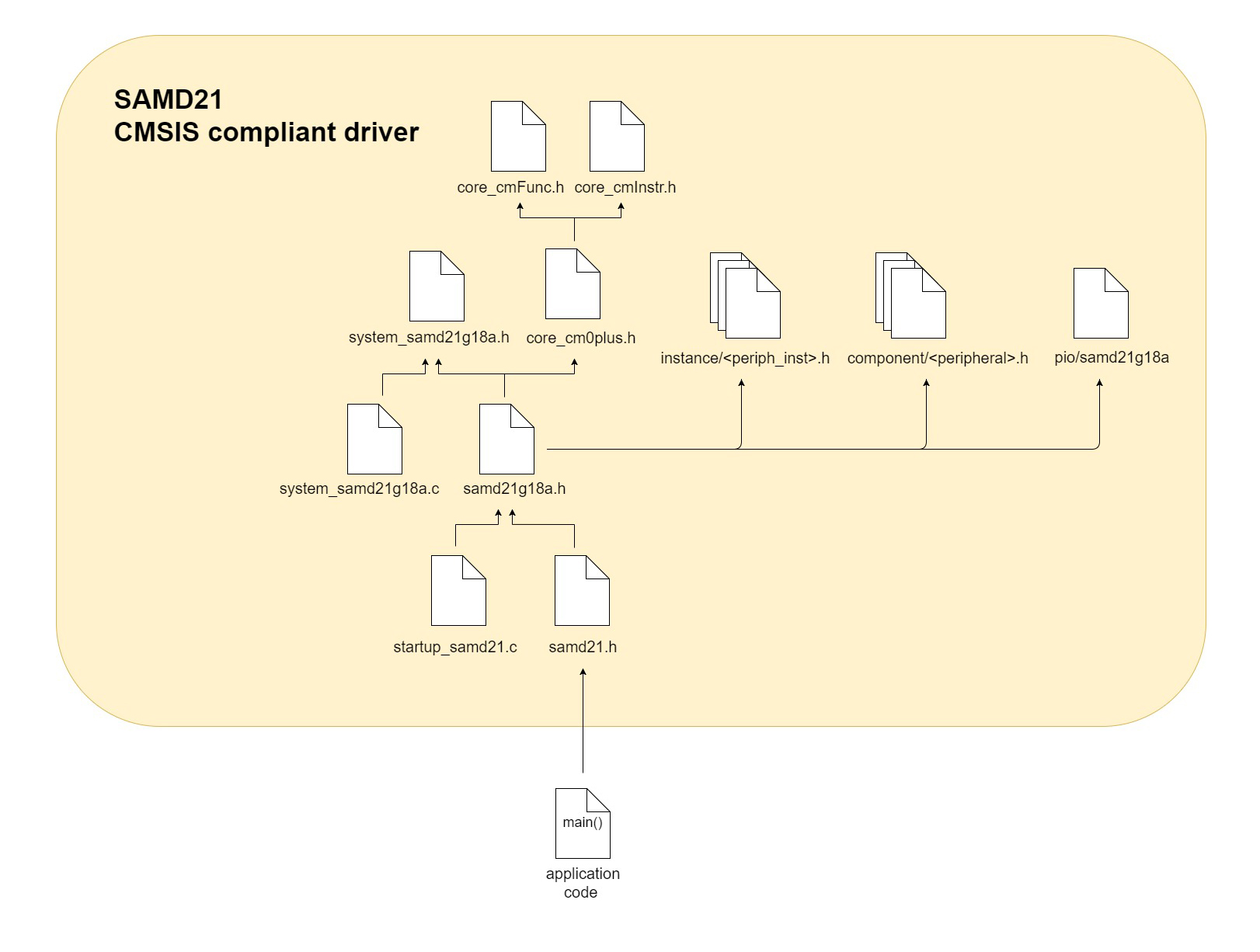 The main application includes samd21.h which contains a series of conditional compilation #ifdef  directives and includes the specific driver file based on the device we’re programming, in thie case samd21g18a.h which among other things:

Folders instance, component and pio contain the rest of the driver: 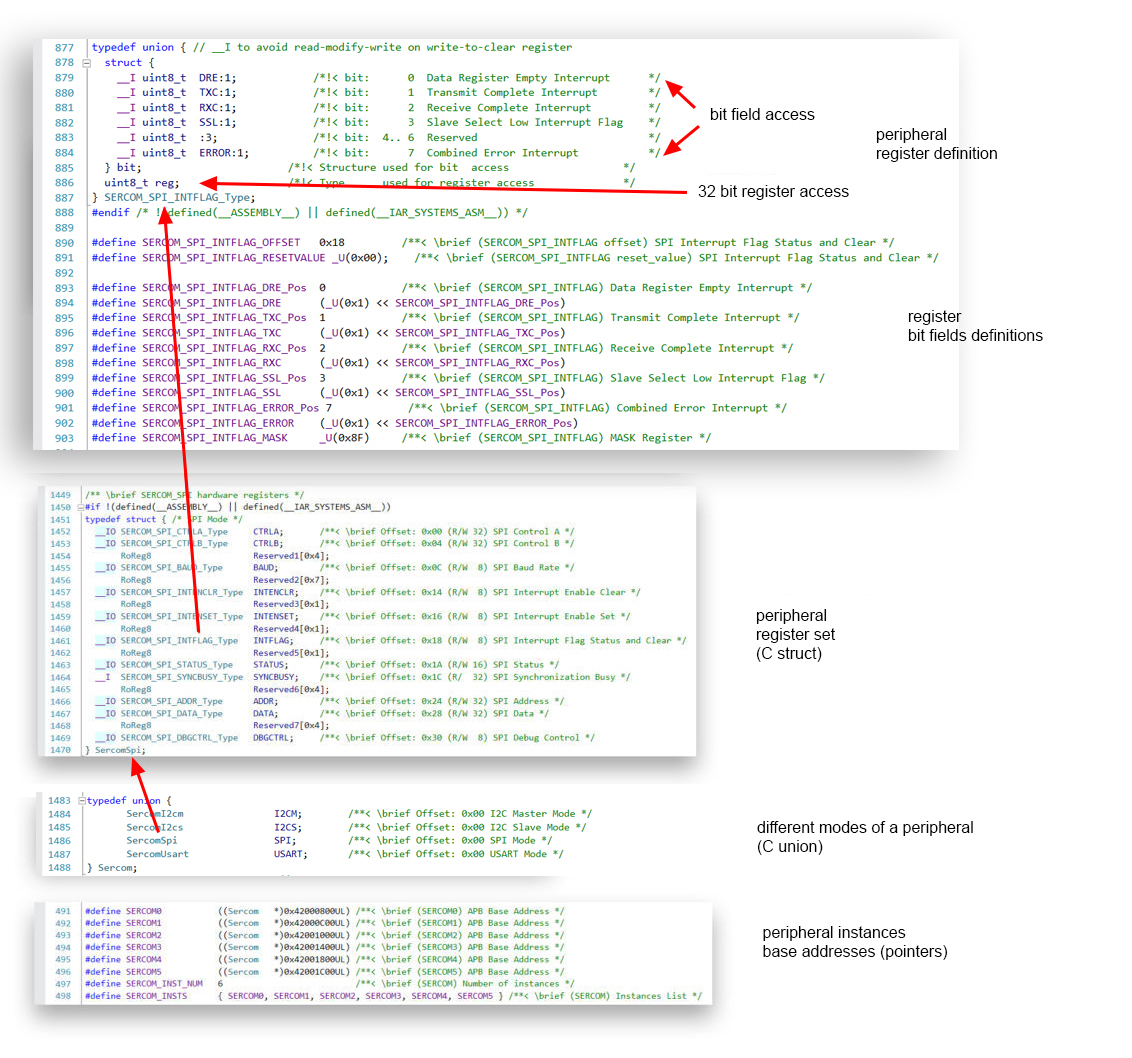 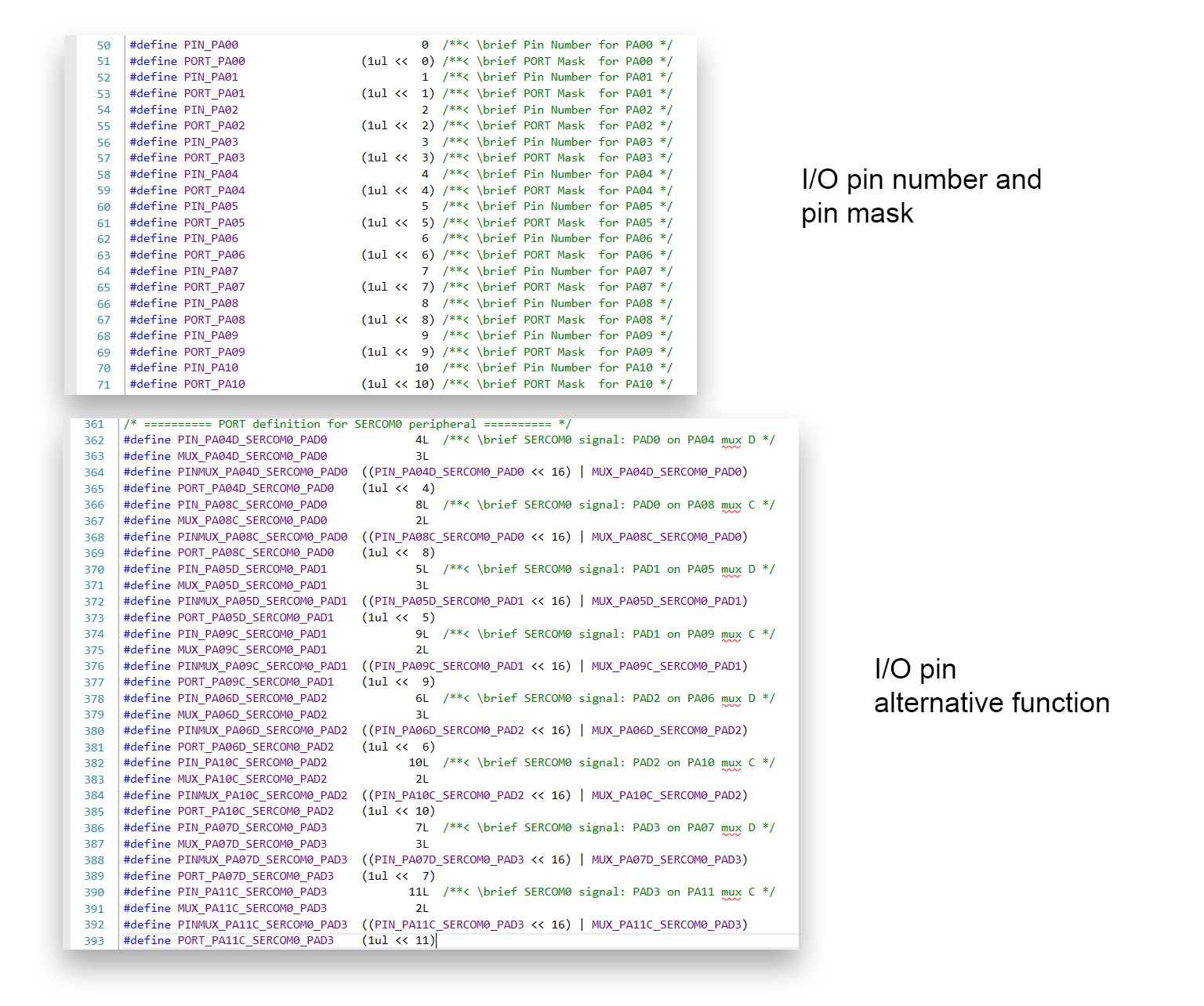 Now that we’ve had a brief look at how a software device driver is structured we’re ready for a simple application. The official development environment for ARM based Atmel/microchip MCUs is Atmel Studio, which uses a GNU-ARM toolchain to build projects. Let’s create a new project under File->New->Project->GCC C Executable Project eand choose SAMD21G18A as device. The main file must include samd21g18a.h in order to use the CMSIS driver (the header will automatically include all the necessary files). Function main() calls systemInit(), declared in system_samd21g18a.h and defined in system_samd21g18a.c . This file is under the folder Device_Startup along with startup code file startup_samd21g18a.c. No system configuration is performed at the moment, we’ll see later how to configure SysTick, NVIC and more importantly the clock. 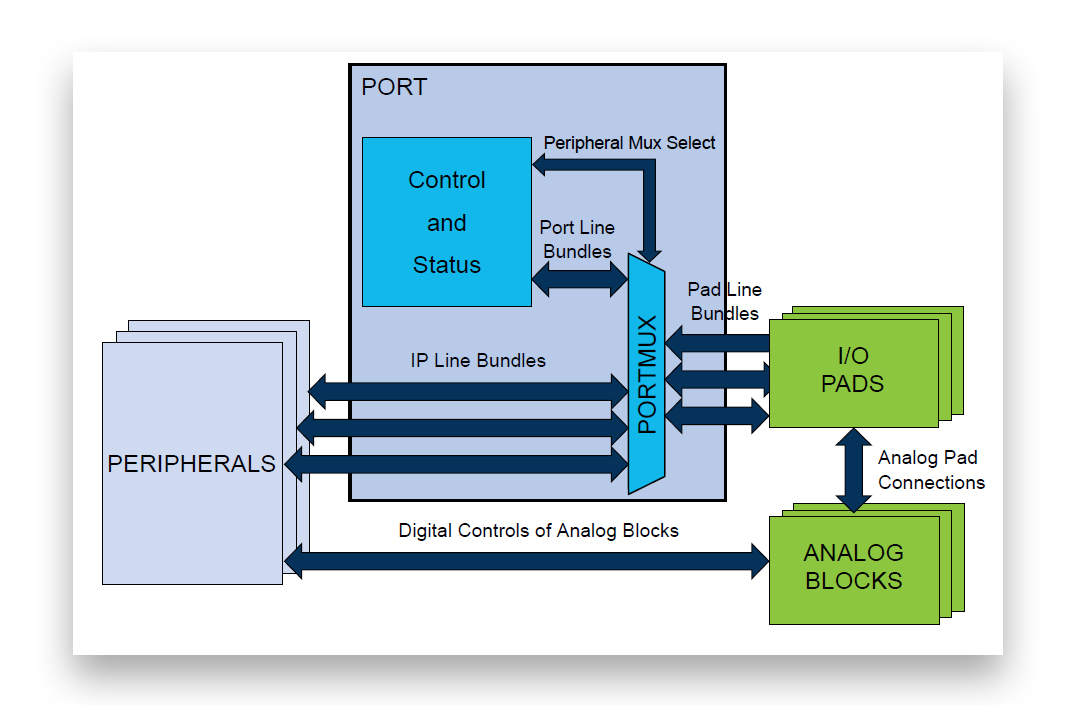 PORT peripheral has the following registers:

As said MCU pins are organized into two groups of max 32 pins each and the SAMD21G18A exposes 32 pins on PORTA and 24 on PORTB. Just a few of them are exposed on the Arduino board (pay attention to the different numbering of the pins on the board):

component/port.h defines PortGroup, a structure containing the register set of an instance (port or group) of PORT peripheral. Each instance is a group of (max 32) pins and the two instances are accessed from another structure called Port which has a single array member called Group, which contains two PortGroup structures (two instances of PORT peripheral are consecutively mapped, PORTA is Group[0], PORTB is Group[1]); the base address of the Port structure is defined as PORT nel file samd21g18a.h (as all other peripheral base addresses). Arduino pin 13 is connected to the user led on the board (near serial tx and rx leds, marked with L) and corresponds to pin 17 of PORTA of SAMD21 and defined in pio/samd21g18a.h as PORT_PA17. Let’s configure the pin as output and use it to blink the led:

As an alternative it’s possible to use instance/port.h to configure the pin: