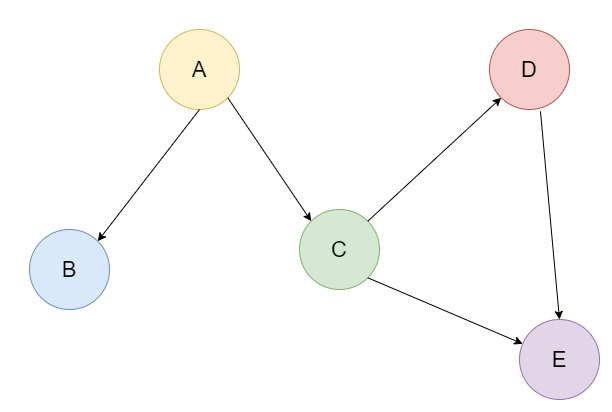 Just a quick summary of some of the most important properties of graphs that will help us choose an implementation based on time and space complexity of graph algorithms: let’s indicate with

the total number of vertices/nodes of the graph and with

the number of edges. The following limitations are true for directed and undirected graphs respectively:

A graph is said to be dense if the number of edges is close to the maximum number of edges, or sparse if it’s much less (these are not mathematically accurate definitions, nor there’s a clear separation between the two). This classification will be useful when we need to decide which data strucure to use to represent the graph in our code.

I’ll now show you three implementations of a graph data structure: there are many ways in which we can store vertices and edges inside a graph, and each comes with its own trade-offs as far as performance and memory usage are concerned. The basic operation performed on a graph is traversal, which consists in visiting all the graph nodes sequentially. There are two kind of graph traversal algorithms: breadth-first and depth first. In order to perform both we need to determine all the vertices that are adjacent/connected by an edge to a given vertex, so this is the basic operation that I’ll analyze to see how well each implementation fares in term of speed and memory. Another useful operation is knowing if a given node is connected to another so I’ll consider that as well.

The simplest way to represent a graph is to store two lists: an ordered list of vertices and a list of edges. A vertex is a simple struct containing whatever data we want to store into our graph (for example the name of the vertex itself). An edge stores two references that point into the vertex list (for example a couple of indices), each one representing  a vertex in a connected pair, and a weight, if the graph is weighted:

A graph with an edge list: each edge contains the indices of the connected vertices, and optionally the edge weight.

A node is added to the sequential list, so each vertex is identified by an index inside the list. Here, I use a vector, but a static array would do as well, if we know beforehand how many nodes are in the graph. Adding an edge is as simple as specifying the vertices (better, their indices inside the vertex list) that the edge connects. Optionally, we can specify a weight, if the graph is weighted. Again I use a vector for the edge list as well:

We can also represent a directed graph with an edge list, if we assume that the pair of indices in an edge is not symmetric: an edge with the pair {0,1} is not the same as an edge with {1,0}, meaning that the connection is from 0 to 1 and not vice-versa (this will be important when we’ll search for all the adjacent vertices of a vertex).

In order to check whether a node is connected to another we must linearly traverse the entire edge list, which takes time proportional to

. We saw that for a gaph

so we’re really performing the operation in

time, in the worst case.

A graph implemented with an adjacency matrix: each element [i,j] of the matrix represent the weight of the edge between vertices i and j (INF means no connection).

If the graph is unweighted the weight is just 1 and if the vertices are not connected we can choose an arbitrary big number to represent that (I use INF which is represented by the maximum integer value from the numeric_limit standard trait):

is not the same as element

An adjacency matrix lets us find if a node is connected to another node in O(1) constant time, since it’s just a couple of array lookups. Finding all the connected nodes is just a matter of reading through a row of the matrix, and it is performed in O(|V|) linear time. An adjacency matrix representation requires a space complexity of

to store all the connections between vertices. Most of the graphs that are used in practice are sparse, meaning the adjacency matrix will have lots of INFs (or NILs, or whatevere value you choose for an absent edge) in it, and a lot of memory will be wasted storing those values.

An adjacency list has one entry for each vertex, and each entry contains the list of all vertices (indices) to which that vertex is connected by an edge. The list elements are instance of an adjacency data srtuct, containing the index of the connected vertex and the edge weight:

An adjacency list wastes less memory than an adjacency matrix, in the case of a sparse graph (the majority of real-world graphs are sparse), since it only has to store the adjacent vertices of a vertex. By walking the adjacency list for a vertex we can find if a vertex is connected to another in

in the worst case, but in practice if the graph is sparse it will take much less.

The graph traversal algorithms implementations are the same for all graph representations. They all use a function GetUnvisitedAdjacentNodeIndex() to find an adjacent node that hasn’t been visited by the traversal yet. It returns the index of the vertex if found, otherwise returns -1 (that’s why the function returns an int instead of an unsigned). To know if a node has been already traversed we store a boolean flag inside the node struct:

Breadth-first search algorithm uses a FIFO queue as a helper structure to perform the traversal, Depth-first  algorithm uses a pushdown stack instead, which can be explicit or implicit if recursion is used (I show both implementation in the code above). A function object is passed to the function to act as a visitor that implements the action to perform when visiting a node.

Both traversal algorithms need to find an adjacent vertex that hasn’t been already visited. The function GetUnvisitedAdjacentNodeIndex() takes a node as argument and returns the next unvisited adjacent node (or -1 if it finds none). In order to do so, it uses the list of vertices and whatever structure we use to represent edges/connections.

If we use an edge list, as we saw, we need to traverse the entire list in order to find all adjacent vertices to a given vertex:

in this case we consider an undirected graph and we check both the first and the second vertex in the edge struct (if the graph was a digraph, we would consider only the first vertex, sice the edge goes from first to second). An adjacency matrix simplifies the search:

We take the row which corresponds to the vertex whose adjacent vertices we want to find, and scan the array of connections, remembering that an INF value stands for no edge betwee the two vertices. Using an adjacency list gives some advantages,as we saw earlier, in case of a sparse graph:

In this example I used a vector to implement a list of edges, but we could use a linked list too. If we want to find out if a given vertex is adjacent to another, we could store the elements in the adjacency list as sorted by vertex index, and perform a binary search (it would be faster for retrieval, but insertions and removals would take more time): a bynary search tree would be a good choice to store the edges.